“Individuals may rise or fall, may live or die, property may be lost or gained, but the colony as a whole, will prosper,
and on the spot which we labor, so long as the world stands, will be the center of intelligence and activity.”
—N.C. Meeker

In April 1870, 144 families traveled westward on the railroad to settle in “Union Colony.” This new society gained national publicity through the support and praise of Horace Greeley, editor-in-chief of the New York Tribune, who popularized the phrase, “Go west, young man.”

These settlers ambitiously planned the first large-scale irrigation ditches in the region, utilizing the experience of Meeker, Benjamin Eaton, and others. Within three months of their arrival, the colonists had constructed a working irrigation ditch, dubbed the “town ditch” or “Greeley Number Three”.

A Brief History of the Union Colony Pioneer Society 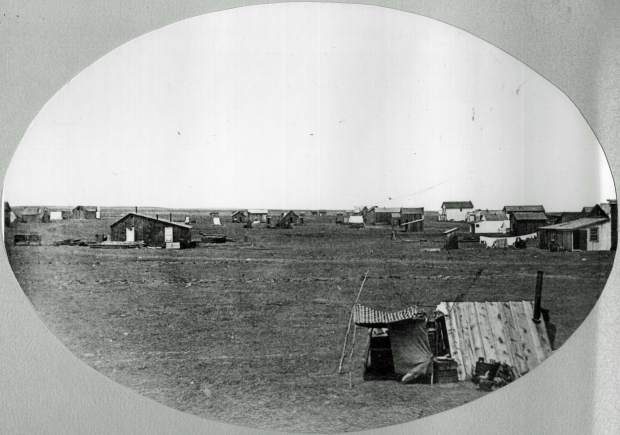 The association originally called the Society of Union Colony Pioneers was organized on February 22, 1895 at a meeting called by Henry T. West. On July 4 of that year, the Society marked not only the 25th anniversary of the founding of the Union Colony but its own silver
anniversary as well, at a grand celebration in Lincoln Park.

The Society was given a formal structure quite early, officers being appointed at that first organizational meeting. J.J. Armstrong was appointed chairman and Mrs. M.A. Brownell was chosen as secretary. Mr. Armstrong then appointed a committee to draft by-laws. Those responsible were J.A. Woodbury, Joseph Moore, H.C. Watson, C.A. White and Thomas Stimson. Temporary officers were elected as follows: H.T. West, President; B.S. LaGrange, Vice President; Mrs. M.A. Brownell, Secretary, and J.A. Woodbury, Treasurer. Those early members then decided the criteria for membership, set up a finance committee, and established an Executive Committee with the power to appoint any sub-committees needed in the future.

The official name of the new group was “The Society of Union Colony of Colorado Pioneers” and an initiation fee of $1.00 was established. Records reflect that 66 colonists signed the original roster and paid that fee. On April 19, 1895, the organization became permanent when the members approved the proposed by-laws. The day chosen for the anniversary celebration that year was the second Tuesday in June, which happened to be June 10. That celebration had to be postponed due to localized flooding, and was instead held on July 4. The annual celebration was later expanded to include commemorating the approximate date on which water first flowed in the irrigation ditches of the Union Colony.