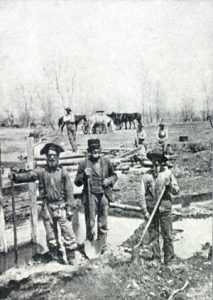 The 1859 discovery of gold brought miners to Colorado. Although the Poudre basin itself offered only modest lodes, the influx of people created a steady market for hay, grains, and other basic agricultural products. The Homestead Act of 1862 further encouraged settlement.

As a result, native tribes were pushed away from the river. Indians struggled to find disappearing wildlife impacting their traditional means of survival. Outbreaks of measles, cholera, and other diseases took their toll on regional tribes. Chief Friday, a local Arapaho leader, wanted to protect his people’s claim to land in the Cache la Poudre Valley. Friday spoke English and advocated for a reservation along the Poudre’s north bank. His efforts failed however, and he along with his band was removed to the Wind River Reservation in central Wyoming in 1867. In the early 1860s northern Colorado farmers began digging modest irrigation ditches using a shovel or a team of horses. Most of these early irrigation structures ran no further than a few miles and closely paralleled the Poudre’s banks. With the construction of irrigation ditches, settlers could now grow crops and raise livestock. More families staked out land along the river, forming communities like Laporte, Union Colony, Fort Collins (a former military installation), and Timnath.