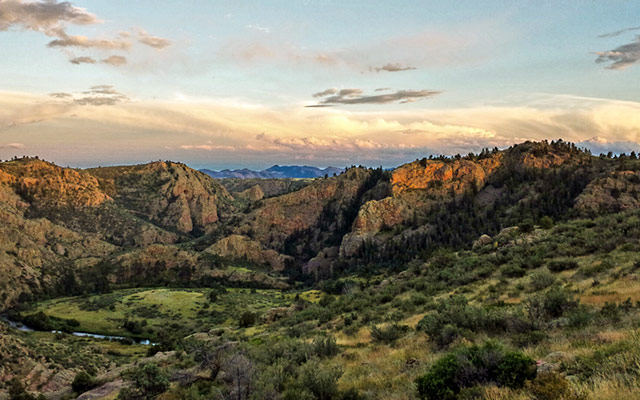 “A KEY ROLE IN HISTORY

While most visitors to the Phantom Canyon preserve come for the beauty of the landscape, few realize the historical significance around them: It was in this watershed where Western water law was born.

In the 1870s a drought led to overdrawing of the water in the Cache la Poudre River. Irrigation canals dried up, causing a dispute between two of the water users – upstream farmers near Fort Collins and downstream farmers in the Union Colony commune founded by Horace Greeley, famous for having declared, “Go West, young man!”

The issue was settled in court in favor of the first water users – the Union Colony commune – a decision that formed the bedrock principle of Western water law: “First in time, first in right.” In recognition of this, Congress declared the Cache la Poudre River a National Heritage Area*** in 1996.”

***The exact boundaries of the Cache la Poudre River National Heritage Area lie to the south and east of Phantom Canyon Preserve. The Heritage Area designation begins along the eastern edge of the Roosevelt National Forest near the mouth of the Poudre Canyon and extends through 45 miles of the river until its confluence with the South Platte River east of Greeley, Colorado. It was designated as National River Corridor in 1996, and then as an official National Heritage Area in 2009.

For the full article, check out the Nature Conservancy’s website here.