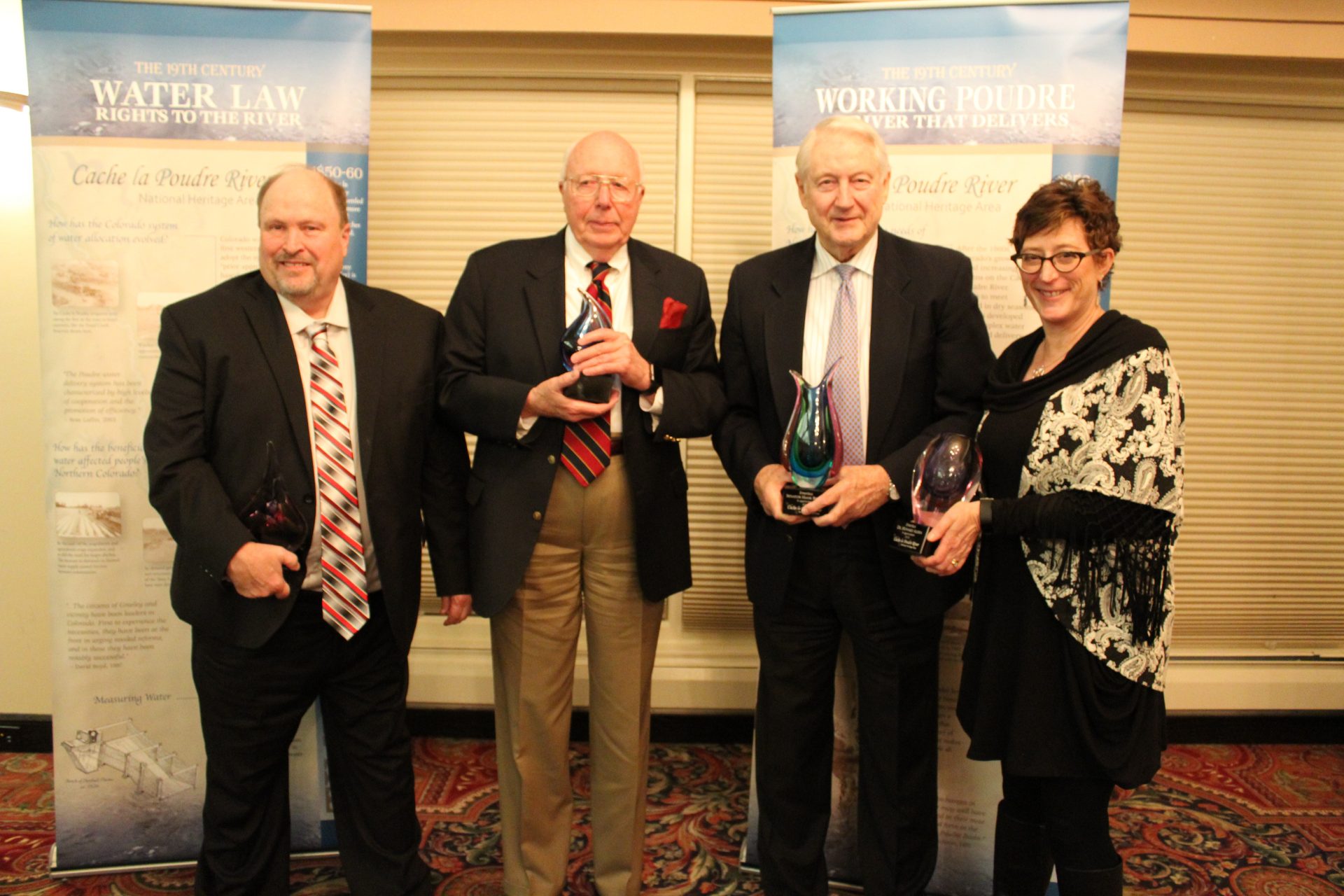 Hank Brown – A Vietnam veteran, who served as a forward aircraft controller in the US Navy. He is a graduate from the University of Colorado. After graduation he worked for Monfort. In 1974 he was elected to the Colorado State Senate. In 1980 he was elected to Congress representing Colorado’s Fourth Congressional District. In 1986 he successfully sponsored legislation to make the Poudre River north of Fort Collins a Wild and Scenic River. In 1990, Hank was elected to the U.S. Senate. In 1996, his legislation to create the Poudre Heritage Area was enacted by Congress and signed into law by President Bill Clinton. Following his service in Congress, he returned to Colorado to become the Executive Director of the Daniels Foundation and serve as President of the University of Northern Colorado and the University of Colorado.

Dr. Howard Alden was a former Colorado State University professor, and a founding member of the Poudre River Trust and the Poudre Heritage Alliance. He was Director of the Environmental Learning Center from 1976-91 and co-founder/president of the Arapaho Roosevelt Pawnee Forest Foundation. He received many awards and accolades over the years, including the Gene Mitchell Award in 1995, the Larimer County Stewardship Award 1996, and worked as a Fulbright Scholar in New Zealand. Dr. Alden served on the original working committee and that helped with the Poudre River’s National Heritage Area designation. The 2011 CALA Guidebook is dedicated to Howard.

Richard Brady’s family ties to the Poudre River Valley go back several generations to when his grandparents first settled in the region. His public and community involvement can be felt throughout Northern Colorado. He was the City of Greeley’s attorney for many years before becoming a founding board member of PHA. He served as PHA’s Interim Executive Director and as the Board Chairperson for several years where he was instrumental in securing technical changes to the original River Corridor legislation. He retired from the PHA board in December 2016, but he is still active as a volunteer for the organization.

Richard C. Maxfield is a fourth generation Coloradoan from Fort Collins and has lived in Greeley since 1961. He is a past director of the Poudre Heritage Alliance where he served as the Chairman and Vice Chair over many years. He was involved in several other community organizations during that time such as the Greeley Chamber of Commerce, Jubilee Ministries of Episcopal Diocese of Colorado, and the Vestry of Trinity Episcopal Church. He is a Paul Harris and W.D. Farr Fellow and past board member in the Rotary Club of Greeley. He is still president of Maxfield Services Corporation, which continues to be recognized for its contribution to service enriched affordable housing.

These four individuals contributed greatly to the formation of the Cache la Poudre River National Heritage Area (CALA), making it the first if its kind west of the Mississippi River 22 years ago in 1996. Several of them also spent years helping PHA manage this unique national designation. The event program for the Emeritus Dinner consisted of introductions by colleagues and friends, with special awards being given to each of the four honorees. The presentations and speeches were recorded for historical archiving purposes.

For more pictures of the event, or for more information about PHA or CALA, please contact the Poudre Heritage Alliance Office at admin@poudreheritage.org or 970-295-4851.