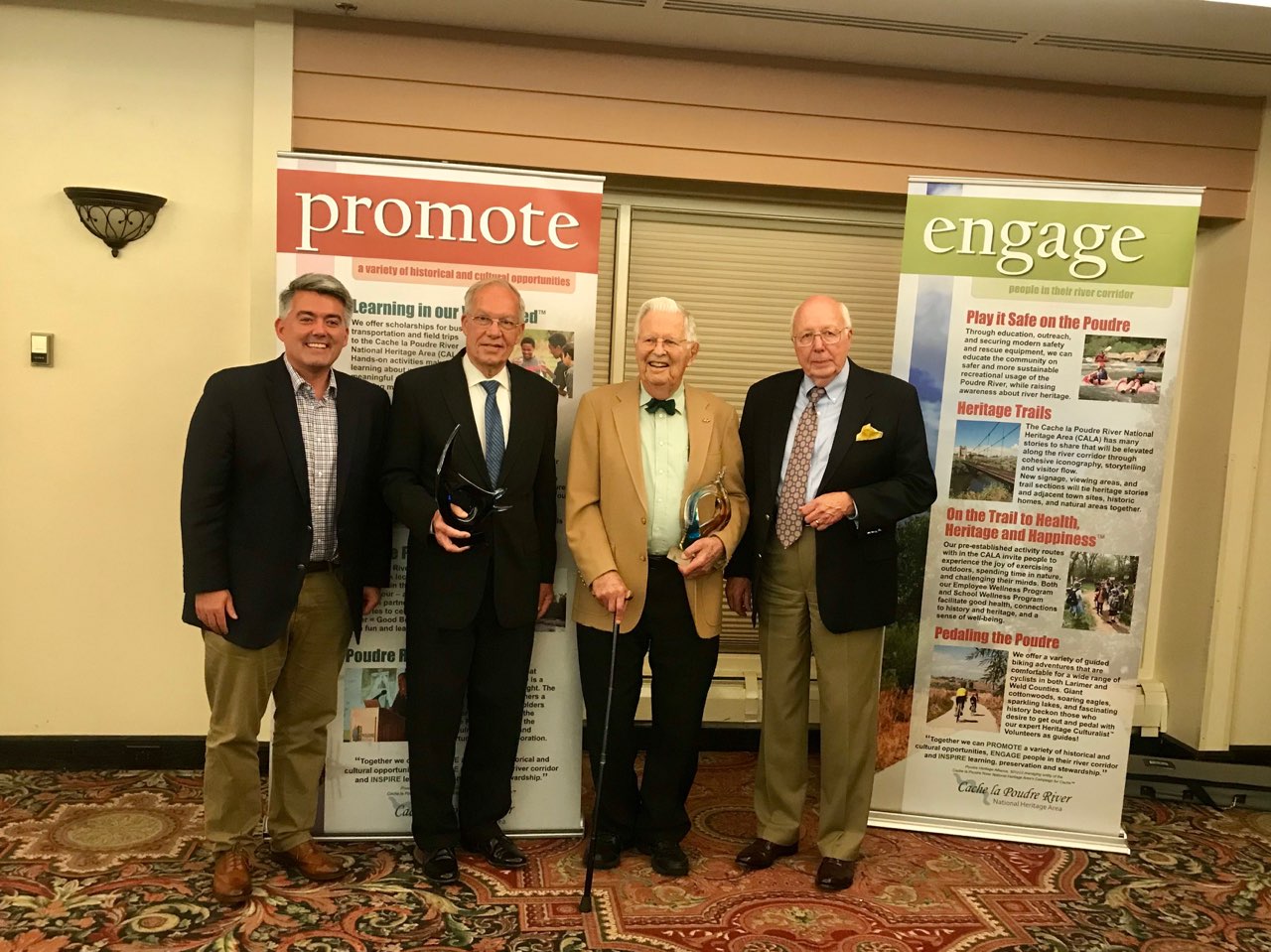 Dr. Richard Bond was a former Board Member of the Poudre Heritage Alliance and was integral in the organization and creation of the Cache la Poudre River National Heritage Area, the first Heritage Area to be designated west of the Mississippi. Dr. Bond was introduced by 2018 PHA Emeritus honoree Richard Maxfield, also a former board member of the PHA.

With his sponsorship of the Cache la Poudre River Corridor Act in 1996, the precursor to the legislation that created the Cache la Poudre River National Heritage Area, Senator Allard was instrumental in the creation of the CALA. He was introduced by his former legislative aide, Senator Cory Gardner. Speaking about the CALA, Senator Gardner said, “We can protect our truly special places by working together with communities of different needs and different interests to bring them together, and with community input we can find a way to protect and preserve the most precious places among us.”

During his acceptance speech, Senator Allard said, “The Poudre River has a reputation. It appeals to all sorts of interests, recreational interests, hunters and fisherman, it appeals to the economies of Greeley and Fort Collins because the water there has contributed to their urban growth. And, also, because it has environmental concerns. And what they [PHA] are trying to do is to bring together a balanced effort and that’s one of the main reasons that I went on ahead and got involved with that particular piece of legislation.”

The event program for the Emeritus Dinner consisted of introductions by colleagues and friends of the PHA, with special awards being given to each of the honorees. The presentations and speeches were recorded for historical archiving purposes.

For pictures and video from the event or for more information about PHA and CALA, please contact Megan Maiolo-Heath at the Poudre Heritage Alliance Office: 970-295-4851. 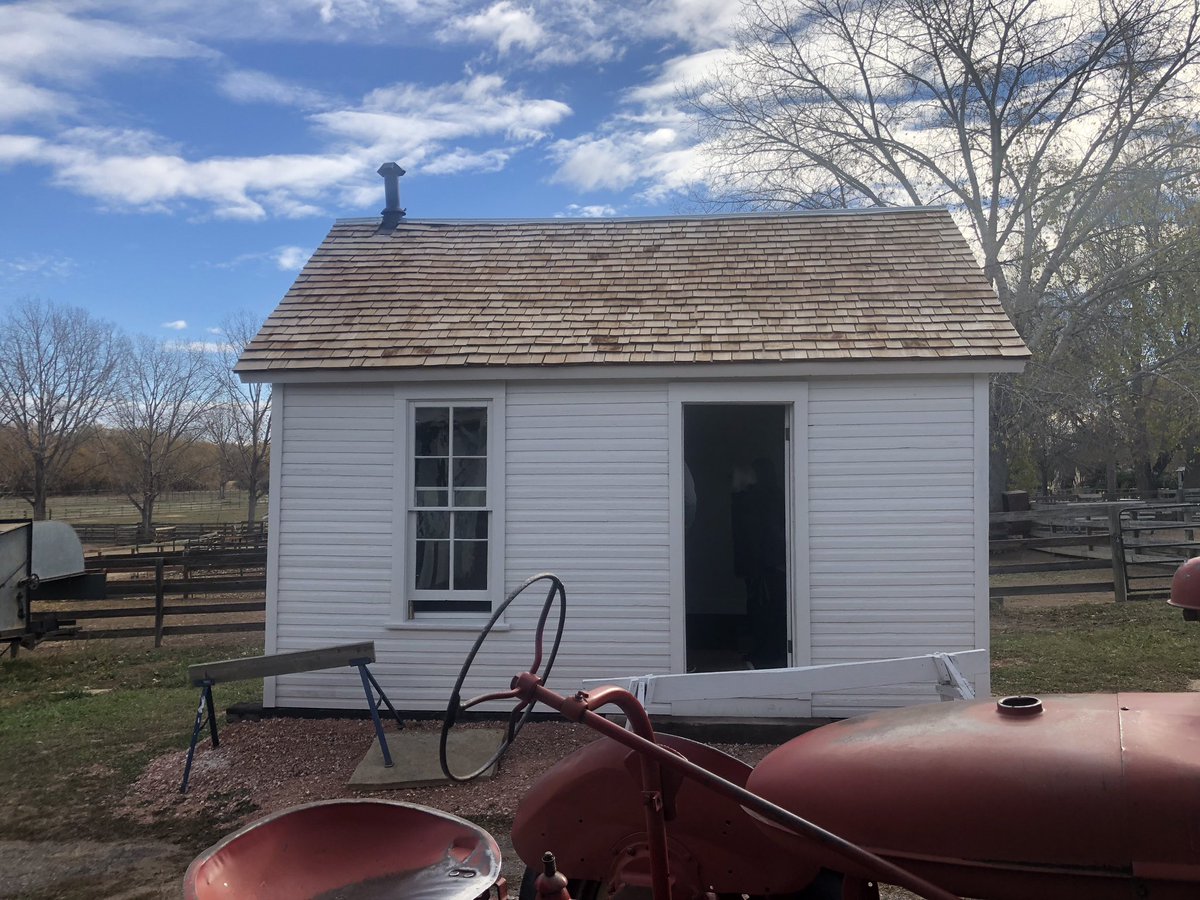 The Ross Proving-Up House at it’s new location at The Farm at Lee Martinez Park in Fort Collins. 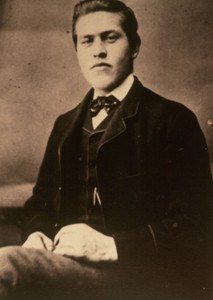 The house, constructed by Scotsman James Ross in 1891, was built to meet the size qualifications under the 1862 Homestead Act of 10 feet by 12 feet. The 1862 Homestead Act encouraged settlers to claim 160 acres of land owned by the U.S. government. The only stipulation was that the settlers live on and improve the land. After a minimum of five years, they could pay a small fee, apply for a patent and receive title to the land. This is how much of the vast United States prairie was settled.

Meg Dunn, a Historian at Northern Colorado History, writes, “Because of the tremendous amount of work that was necessary to put the land under cultivation, families often built a small, simple structure to live in until a point when they could spend more time and resources on building a larger house. This small building (Today we’d likely call it a shack.) was referred to as the “proving up” house because it was a step in proving up for the land.”

The Poudre Heritage Alliance (PHA) is now accepting applications for its 2019-2020 field trip grant program, Learning in Our Watershed! With funding partners like the National Park Foundation, PHA is very excited to expand this program and provide additional resources to program participants.

Interested parties will need to submit their application online: https://www.poudreheritage.org/field-trip-grants/. Priority is still based on first come-first serve requests, so make sure to apply at least three weeks in advance of your trip. However, because of grant requirements, Title I schools and fourth grade classes will be considered first for funding.

PHA looks forward to partnering with your school while promoting programs that introduce local youth to the river and the area’s heritage. Contact Jordan Williams at programs@poudreheritage.org if you have further questions, or call 970-295-4851.